Madesu is the Lingala word for beans. Beans are one of the staple ingredients in the African cuisine and they are cooked in every part of Africa in different ways. That’s why as part of my Vegan week, I decided to make a vegan version of the African red beans stew I used to have when I was growing up. Usually in Congo, Madesu or beans are served with beef, pork, salt cod or tripe sheep, however since I’m fully vegan this week; I decided to make this stew without adding any type of meat or fish.

To be honest, I have been making this vegan version of my mother’s recipe for many years without knowing that it was actually a vegan recipe, mainly because I wasn’t fully aware of what veganism really meant. Personally, I have always preferred to eat red beans stew when there is no meat or salt cod added. 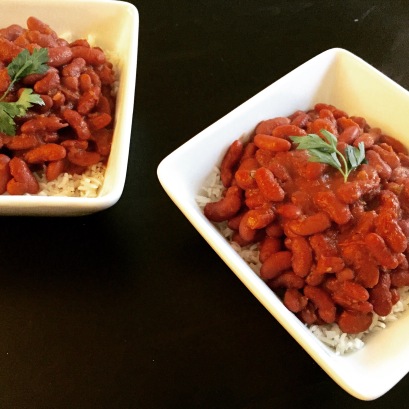 1. Soak the beans in cool water for 10 to 12 hours. Once the soaking time is over, drain the beans and discard the water used to soak them. (I usually soak them overnight)

2. In a pot, pour about 6 cups of water to the beans. Add the onion pricked with wholes cloves and bay leaves. Over medium heat, boil the beans for 50-60 minutes with the lid on.

5. In a French or Dutch oven, over medium heat, drizzle about one or two tablespoons of olive oil (traditionally peanut oil or any other type of vegetable oil is used to cook Madesu stew) and sauté the onion mixture with the homemade hot pepper paste or the chili flakes if you choose to add them.

6. After sautéing the onion mixture for 2 minutes, add the crushed tomatoes. Let it cook while stirring for at least 3-4 minutes. Then pour three (3) cups of the reserved liquid used to boil the beans and two (2) cups of boiling water.

7. Now it’s time to add my secret ingredient which is 2 tablespoons of Ketchup. Yes, you read it correctly. My mother would probably kill me but I like to add Ketchup to balance the acidity of the canned tomatoes with the sweetness of the Ketchup.

9. Add the boiled beans in the pot and let it cook for 20-25 minutes without the lid or until the sauce has thickened to a stew consistency. Stir from time to time in order to avoid the beans to stick in the bottom. Adjust the seasoning to your liking before turning off the heat.

Serve with rice and it’s time to savour that stew.

To boil one (1) cup of light red kidney beans, you will need three (3) cups of water.

In order to save time, soak then boil the beans one or two days before making this recipe. It’s simple to conserve boiled beans; just put them in a food storage container and store them in the fridge until you are ready to use them in your recipes.

However, for those who feel too lazy to go through the whole process of soaking then boiling the beans, it’s ok to skip it and to use canned beans instead of dried ones. There is nothing to be ashamed of using canned beans. I use them often when I’m in the rush.

When using canned beans, the cooking time has to be revised downward.