Even though, over the last few years, my mother tends to favor lamb and roe deer meat in her Christmas menu, poultry was always featured on my family’s feast table during the holidays. Capon and turkey being the most favored poultry for holiday celebration in my mother’s kitchen, and now in mine.

As you could have guessed, this year was no exception. Like last year, turkey was the pièce de résistance on our table. In my humble opinion, turkey is the mainstay of Christmas feast. It’s also the perfect poultry for large gatherings during the holiday seasons. In fact, without being over expensive, turkeys are affordable and big enough to feed a large crowd. 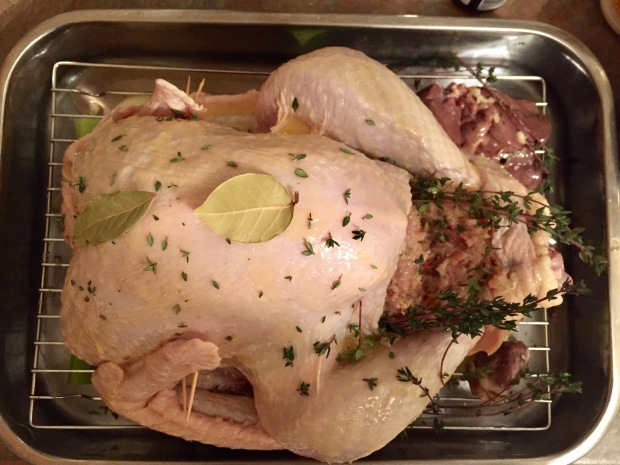 And the bird is stuffed!

Because turkey tends to have bland flesh, it’s important to add some flavor to the meat by brining it. Brining is just a process that consists of soaking something (in this case turkey) in salty water or solution. And it also helps keeping the meat moist, mainly because soaking it in a brine first, reduce moisture loss during cooking time. As a result, your turkey will remain moist because brining enhances juiciness. For better result, brine the turkey for 10-12 hours or overnight. 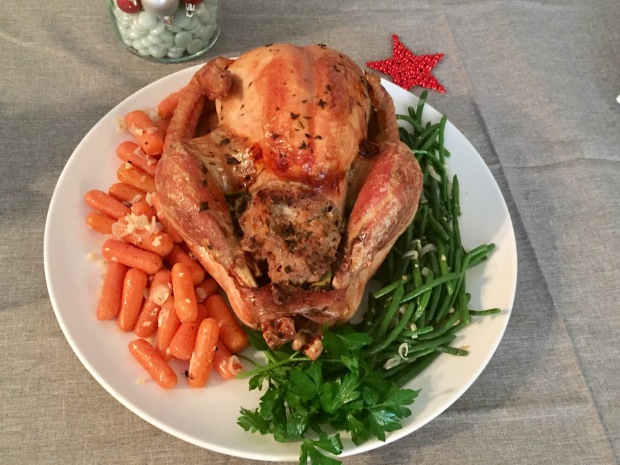 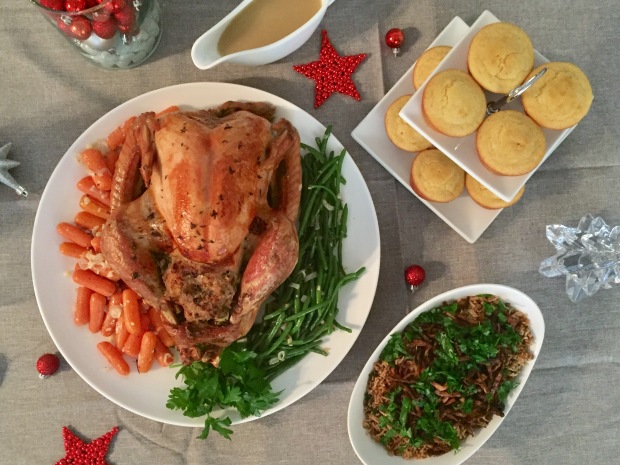 Last year, I stuffed my turkey with a corn bread, however in 2016, I chose to do something completely different by stuffing it with sausage meat and chestnut sausage. The result wasn’t quite the same because the stuffing contained less bread and more meat.

4 Celery branches, cut in half

2 Chestnut Sausages, from my Local butcher

When the internal temperature in the breast reaches 170 °F and 180 °F in the thigh on an instant-read thermometer, turn off the oven and remove the bird from the oven.

Let the turkey rest for another 20 minutes before carving it.

Table salt is two times saltier than Kosher salt, so if you use table salt instead of kosher salt for brining your turkey, make sure to divide the quantity in two i.e. use ¼ cup instead ½ cup.

Use the juices let in the roasting pan to make the gravy.

The onion purée used is simply yellow onions and green onions mixed in the food processor. I store it in a mason jar and add one tablespoon of vegetal oil to prevent the onions from oxidizing once in the fridge.